Christian brethren, union brother: a study of the relationship between religious nonconformity and trade union leadership, in the life of the coal mining deputies' official, W. T. Miller (1880-1963) 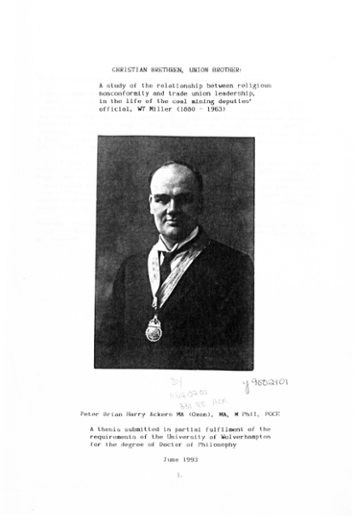 This thesis explores, through a study of the life, work and times of WT Miller (1880-1963), the relationship between religious nonconformity and trade union leadership. It does this with with specific reference to two organisations with which Miller was involved during his life. One was the British protestant religious sect, the Churches of Christ, in the Wigan coalfield between the mid-nineteenth century and the Second World War. The other was the colliery deputies' trade union from its formation early In this century, through the inter-war period (when Miller became national President and Secretary), to the union's re-formation as the modern National Association of Colliery Overmen, Deputies, and Shotfirers, after coal nationalisation. The study attempts to understand the connection between Miller's religious ethic, developed within the Churches of Christ, and his trade union leadership style, as displayed In the colliery deputies' trade union between the wars. It draws on Max Weber's 119761 understanding of the 'elective affinity' between ascetic protestantism and this-wordly business entreprenuership, to analyse the relationship between a similar, but later form of religous sectarianism and labour movement leadership. To this end, the thesis employs and explores a biographical method of studying the 'social meaning' of working class religious attachment in labour history. This draws on a wide range of documentary and oral sources, relating to Wigan, Miller's family, the Churches of Christ, and the colliery deputies. Chapter One provides a critical summary of the coal mining labour history literature, with special reference to the main theme of trade union leadership, and the treatment of religious nonconformity, trade union moderation and the biographical method. Chapter Two considers Killer's hometown of Wigan, showing that though the unusual character of the Lancashire coalfield did not work to their advantage, nonconformists still played a key role in Wigan coal mining labour leadership, in both its Lib-Lab and Labour phases. Chapter Three depicts the specific circumstance of Miller's religious upbringing In a coalfield Back Street Bethel [McLeod 19841 between 1880 and the Great War, and contrasts this to the atmosphere of a more middle class chapel at the same time, and the same chapel in a later time period. It concludes that a combination of general ascetic protestant characteristics and the special circumstances of a democratic, self-governing, coal mining chapel account for Miller's gravitation into trade union leadership. Chapter Four explores Miller's adult trade union career through a number of themes - individual and collective status, industrial co-operation, individual and social responsibility, public service - which link his protestant religious ethic to a distinctive trade union style. Care is taken not to crudely explain the corporate policy of the trade union by one individual's religious beliefs. Instead, an 'elective affinity' is drawn between the type of union the deputies became and the sort of trade union style Miller's religious ethic predisposed him towards. Chapter Five summarises the evidence on Wigan, the Churches of Christ, and the deputies' trade union, and returns to the strengths and weaknesses of the biogrpahical method. After returning to Weber's framework, it concludes that Miller was a representative labour figure, who, along with many others like him, continued to play a central role in labour movement leadership up to the Second World War.